The infamous Dyson Hot and Cool - One year on 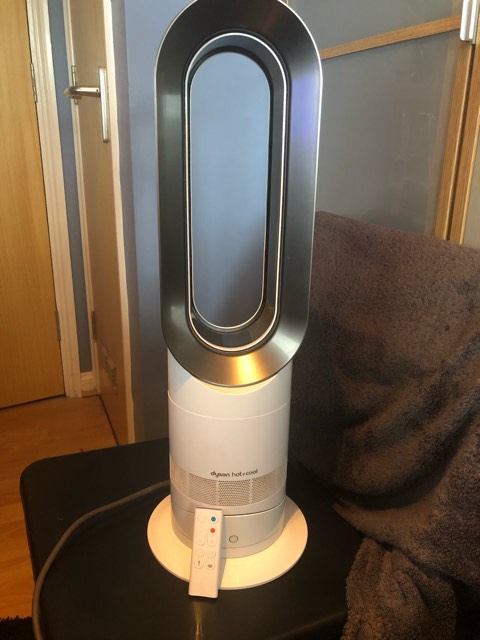 Around 1 year ago, amid the scorching summer heat, I decided that it was time to invest in a fan that claims it can do it all - The Dyson AM09 Hot and Cool Fan Heater.

While Dyson are usually known for the vacuum cleaners, more recent innovations by them include the fan, hairdryers and even specialized lighting! The AM09 promises to be effective all year round, by providing sustained cool streams of air in the summer, and room regulated heated during the winter. As I have had it for quite a while now, now I feel is a good time to determine whether you could do better than its £300 asking price.

The first (and for many most important) feature I would like to discuss is its appearance. Famed for a bladeless design, the AM09 doesn’t look out of place even in the most futuristic of homes, with a contemporary yet simple stand that lets the fan swivel around in a typical motion. Unlike rival tower fans, it is actually quite small in comparison, making it portable enough to move around the house or place on a desk, while still being large enough to pack a punch.

However, the Hot and Cool fan is not intended to be some form of decoration, after all its sole function is to either heat or cool a room. In winter it performs amicably. The temperature gauge that features on a small screen at the front of the fan makes it easy for one to make the room as hot or cool as they please, and thanks to an A++ energy rating, won’t break the bank when the radiators are not doing their job well enough.

Unfortunately, the praise for the AM09’s performance ends there, as its role in cooling a room on a boiling day ultimately disappoints. The temperature control does not work anywhere near as well when cooling a room in comparison, leaving even my small bedroom almost inhabitable during peak summertime as the heat would not disappear.

Furthermore, should you strain the fan at its peak performance ranging from 1 (barely noticeable) to 10 (full power), suddenly any room that contains one of these fans will be subject to the sounds of a loud motor, meaning you’ll be forced into a slight bellow if you wish to converse in its presence. The fan also comes packed with a small controller, which is vital for changing any settings. You need to be careful not to lose this, as there are no buttons other than on/off on the fan itself.

Overall, despite being a pretty piece of kit, I would probably not recommend this to a friend. At the same price point, you could afford an Air Conditioning unit which would do a much better job in the summer, as well as a small heater, which would do an equal job in the winter. It’s a shame that it ultimately falls short, and perhaps in the future it continues to develop into a year round house essential.

Thanks for such an honest review! If you could price this yourself, what do you think it’s worth?

Thanks for the review!

About what size is it? Looks like it’s 60 to 80 centimeters high. What's the Wattage? Do you know what technology it uses for cooling?

#1 I think around £125-£150 would be appropriate, after all you get quality assurance as it is from a renowned name and therefore a designer tag on it?

From what I can find it says it is 2000 watts heating, and 30 cooling, although that does seem quite a large range for it to operate. As for the cooling technology, it has something they call 'air multiplier' which basically helps with giving a consistent flow of fan power at all times. If the room is already hot, then it might not be in this fan's capabilities to cool the room down as well as an A.C, for example.

Aha. I searched for “air multiplying technology” on Google. It seems that it doesn’t cool the air but instead spreads it very evenly. To benefit from the cooling effect, you should point it so that it blows across your skin. In that respect, it is similar to other fans.

» Will a dyson air multiplier actually make a room cooler in a very hot place like NYC right now? - Quora

To participate in the discussion, you must first become a member. It is quick, simple and free. The membership gives you access to all our communities.